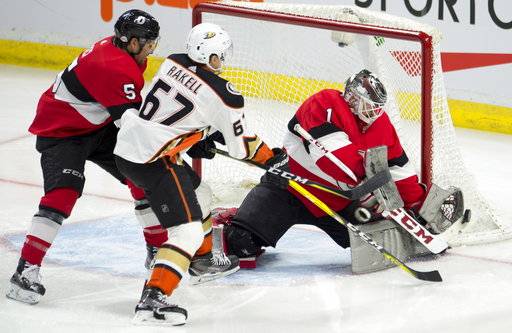 Photo by The Daily Herald

There is a big possibility for the Swed RickRakAttack will return to the lineup after being out for 13 games due to an ankle injury he obtained in the Blackhawks game. Rakell has been skating with Getzlaf and Sprong in practice and Randy Carlyle is hoping there will be an immediate spark between them playing in a game which hopefully will be tonight. He is a game time decision after warmups if he will be in the line-up or a scratch.

Head Coach Randy Carlyle (on Rakell): He’s had a history of being able to score. Hopefully he can make a contribution to help the Getzlaf combo. He and Getz have been together a long time. They’ve provided some offense for our team. That’s what we’re looking for. Just be Ricky.

“The Ducks can’t afford to come out of the gates sluggish. Right wing Jakob Silfverberg says he and his teammates know a quick start can set the tone for the rest of the game.”

Jakob Silfverberg (on having a quick start): The start is going to be huge to get the momentum rolling our way right away. It hasn’t been all terrible from our side. I definitely think we have stuff we can build from our previous game against Edmonton. The first goal is going to be big. Hopefully we can see the changes we made in practice. Hopefully we can see that effect right off the start.

The Senators will be without their veteran center Matt Duchene who is home waiting for the arrival of a baby. The Ducks remain without Perry, Eaves, and Miller but the Ducks have put in the work and they are scoring goals but just not enough to win and get the 2 points.

The Ducks bring in an 18-9-6 all-time record against the Senators, including a 10-4-3 mark at home. They’ve won three straight over the Sens at Honda Center, a feat they’ve accomplished just twice in franchise history. [The Ducks won the first three ever meetings between the two teams from March 13, 1994-March 5, 1997.]

Source: Kyle Shohara- Preview: One Streak Will End and Another Will Continue

Photos by The Daily Herald