After months of negotiations and visa being all sorted out… NICK RITCHIE draws into the lineup- Ritchie takes on the Blackhawks in his season debut with the Anaheim Ducks. With Perry out the Ducks can count on Ritchie for being the big body up front of the net (also known as Perry’s office). He is a good skater and uses his body size to be a big physical player out on the ice.

The Ducks need to apply pressure and have good control with the puck which will help attacking the net to get pucks past Crawford. The Ducks also need to be better on the defense so they can can protect Gibson who will be in the net for the Ducks tonight.

The puck is dropped and right from the start it’s GIBBY TIME!!! Gibson comes up with the saves… denying pucks coming from all directions.

The Anaheim Ducks go on the penalty kill as Marcus Pettersson is off to the penalty box for hooking Alexandre Fortin. Gibson comes up with some big saves including covering  up after being hit in the mask… Penalty killed and the Ducks are back to full strength.

The Ducks go on the penalty kill as Cam Fowler is sent to the box with a delay of game penalty… The Ducks didn’t clear the rebounds around Gibson… and the Chicago Blackhawks Goal. It’s a power play goalby Brandon Saad. He gets a handle on a rebound and gets it behind Gibson. The Blackhawks are on the board first, it’s 1-0 Blackhawks.

The Ducks were unable to kill the penalty to Fowler… Fowler is out of the box and the Ducks are back to full strength.

With 13:40 remaining the Anaheim Ducks go on a JMG POWER PLAY!!! It’s Luke Johnson off to the penalty box for tripping Adam Henrique. With good goaltending… penalty killed and the Blackhawks are back to full strength.

Not only does Artem Anisimov feel what being crushed by the BEASTLY LUKE SCHENN… he gets crushed 2 times in a row by Luke Schenn.

The Anaheim Ducks go on a penalty kill as Hampus Lindholm off to the penalty box for slashing Alex DeBrincat. Gibson made sure nothing got past him… Penalty killed and the Ducks are back to full strength.

Just 6:28 remaining… the Anaheim Ducks are on a JMG POWER PLAY!!! Marcus Kruger is off to the penalty box for tripping Cam Fowler. Kruger hit the right heel of Fowler. Crawford shuts down the shots fired at him… penalty killed and the Blackhawks are back to full strength.

Just seconds before the horn sounds Isac Lundestrom is sent to the box for high-sticking Brandon Saad. The Ducks go on the penalty kill and with start the 2nd period on the PK.

The Ducks head to the locker room trailing, it’s 1-0 Blackhawks after 1 period of play. The Ducks need to eliminate the Blackhawks scoring chances by minimizing penalties and stay out of the box. The Ducks need to find a way to get and stay in the offensive zone so they can attack the net. The Ducks know that they will start the period on the penalty kill and knowing that Gibson is strong, technically sound and making the athletic saves back in net for the Ducks.

The puck is down and Lundestrom spends 1:30 in the box to serve his penalty for high-sticking Brandon Saad. With just 21 seconds remaining in the penalty to Lundestrom we have 4-on-4 hockey… Nick Schmaltz is off to the penalty box for tripping Hampus Lindholm… penalty to Lundestrom has expired and the Ducks are back to full strength and the Anaheim Ducks are on a JMG POWER PLAY!!! (about 1:40 remaining of Ducks power play time). Gibson standing strong comes up big even when being shoved into the net by Brandon Saad… Penalty killed and the Blackhawks are back to full strength.

IT’S GIBBY TIME!!! Gibson makes the diving effort and comes up big. Gibson with the diving soccer style save to keep Patrick Kane’s shot out of the net. Too bad for Kane… shot DENIED by Gibson.

THE ANAHEIM DUCKS GOAL!!! A JMG POWER PLAY GOAL!!! SCORED BY #67 RICKARD RAKELL!!! IT’S AN UNASSISTED GOAL!!! Rakell intercepted Jonathan Toews to get the breakaway and the puck finds the way past Crawford. We are all tied up, it’s 1-1.

As the clock is winding down but it’s still GIBBY TIME… and with 20 seconds left… Jonathan Toews takes a shot at Gibson… he comes up with a nifty save and Toews is DENIED by Gibson.

The horn sounds and the Ducks are off to the locker room… they are tied 1-1 with the Blackhawks after 2 periods of play. John Gibson was rock solid in net for the Ducks and that will definitely carry over into the 3rd period. The Ducks need to apply pressure, bounce on loose pucks, and get into the offensive zone to attack Crawford to take the lead in this one.

The puck is down and the third period is underway… just minutes into the period Kesler takes a shot at Crawford and his shot on goal is DENIED by Crawford.

And the net is off the mourings when Rakell and Seabrook fight for position in front of Gibson but slide into him and they end up being inside the net with John Gibson.

…The Chicago Blackhawks Goal. It’s Patrick Kane with the goal, he had a yawning net was a easy goal to make. The Blackhawks are on the board but the Ducks remain in the lead. It’s 2-1 Ducks.

With time winding down to the last few minutes left in the game… the Anaheim Ducks go on a JMG POWER PLAY!!! Marcus Kruger is off to the penalty box for holding Isac Lundestrom. Gibson is off to the bench and it’s 6-on-4 for their power play. The Anaheim Ducks find the back of the net but after video review the Ducks Power Play Goal was turned over and there is NO GOAL ON THE PLAY. The score remains 2-1 Blackhawks. Penalty killed and the Blackhawks are back to full strength.

Just half of a minute remaining in the game 33.8 seconds to be exact… the Chicago Blackhawks Goal. It’s Brandon Saad with the empty net game winning goal. Saad gets the turnover and with speed gets to the empty net and makes it in. It’s 3-1 Blackhawks.

Thoughts on the game from the Anaheim Ducks players 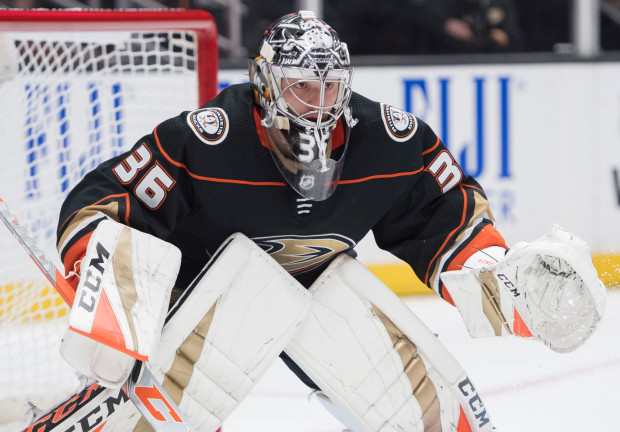 John Gibson (more thoughts on game): But we’re going to stay with it and try to get better. There’s not much else we can do other than just try to keep pushing through it. We’re going to have adversity. I think it just hit some guys a little harder because we got off to a good start. They thought maybe things were a little better than [they] were, but I think reality set in a little bit and this is what we got. 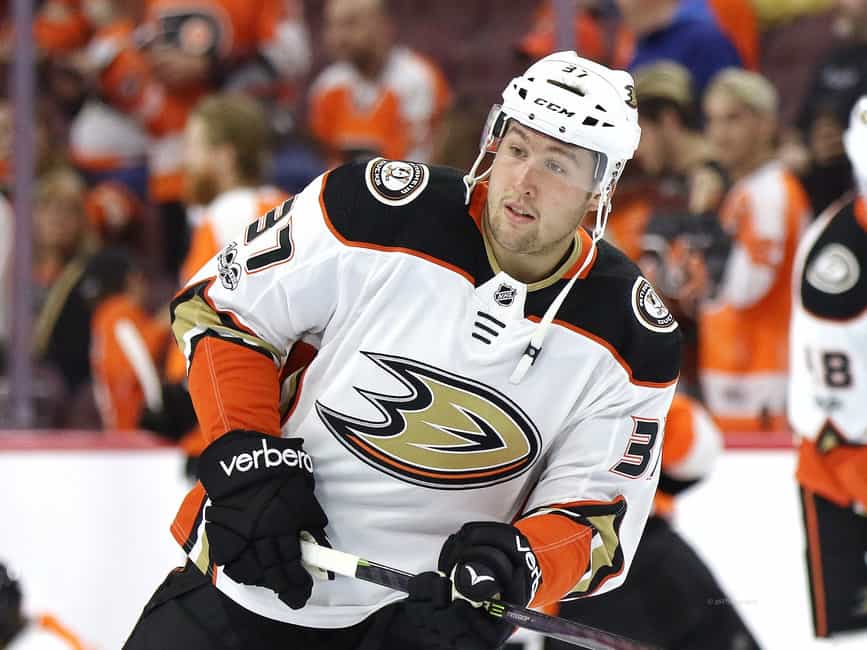 Photo by The Hockey Writers

Nick Ritchie (on season debut): I felt pretty good. It’s obviously difficult playing when you haven’t played in a while. I felt as good as I thought I would and thought I made a few strides. Hopefully every game I can keep getting better. 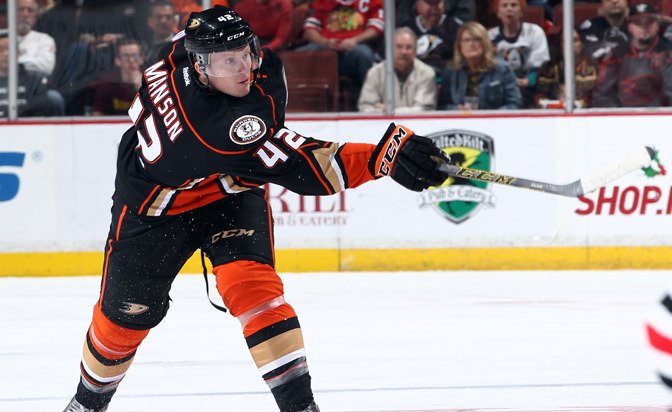 Josh Manson (on the game): You look at our third period and the latter part of the second, I thought we did really good things. I thought we controlled a little bit of the play. We haven’t done that in a while. [There] was something there to build on, I think. 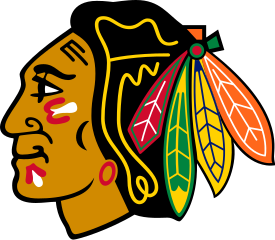 Thoughts on the game from the Chicago Blackhawks players and coaches

Brandon Saad (on his first goal of the season): Well, it definitely feels good, yeah. But that just goes back to keep coming consistently, keeping a level head, keep shooting the puck and they’re going to go in. Regardless if they go in or not, you’ve got to take the positives and stay confident.

Corey Crawford (on the win over Anaheim): That was great. We didn’t give them much all night and especially when we had the lead, I though we got even better. That’s nice to see us do that in a tight game. Everyone played defense together, coming back and helping out our D. That was a big win for us after a tough game.

Photo by The Athletic

Head Coach Joel Quenneville (on Brandon Saad’s performance): He was excellent tonight. That was a great play around the net, taking the puck to the net and sustained it… I thought he had great speed all over the ice tonight and had the puck way more. Happy for him tonight and a big factor in the win.

The Ducks were unable to end their losing streak here in Chicago. They head home for a 4 game homestand and lets hope to see the Ducks make this streak come to an end especially before November 6th when they head to Los Angeles to face the Kings in the first freeway faceoff of the season.