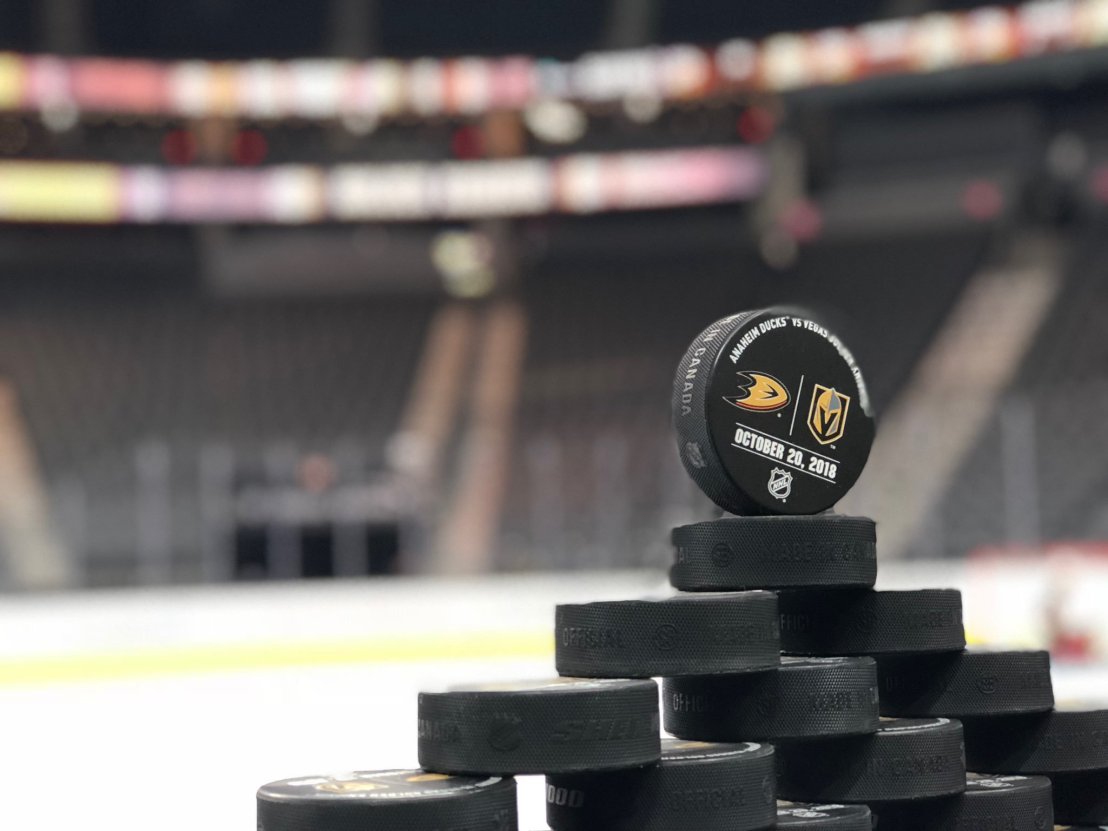 The Ducks are in Sin City to take on the Golden Knights and the Ducks are coming into the game with a 2-game winning streak.

The Ducks get one player off the IR tonight, the Ducks need to make sure that they limit or have no penalties against the Golden Knights. The Ducks have been powerful on the power play so the Ducks and Golden Knights need to not draw penalties The Ducks know that there is strong goaltending on both sides of the ice. It’s GIBBY TIME…. it’s going to be John Gibson vs. Marc-Andre Fleury in net tonight.

GOOD NEWS!!!! THE CAPTAIN IS BACK!!! Ryan Getzlaf draws back into the lineup after suffering a groin injury.

The puck is down and we are underway… just 3 minutes into into the period the Anaheim Ducks go on a JMG POWER PLAY !!! Max Pacioretty is off to the penalty box for elbowing Pontus Aberg. There was a lot of skating in and out of zones… very few shots on goal. Penalty killed and the Golden Knights are back to full strength.

With 14:37 remaining in the period… the Anaheim Ducks go on the penalty kill as Brandon Montour is off to the penalty box for tripping Max Pacioretty. IT’S GIBBY TIME!!! Gibson saving puck after puck… puck hits Gibson in the mask but all is good… and because he is square to the puck the Golden Knights are DENIED a goal off of their power play. Penalty killed and the Ducks are back to full strength.

Now it’s Manson off to the penalty box with a penalty for puck out of play at 11:59. The puck went up and over the glass. Nothing but shots on goal that COULD NOT get past netminder John Gibson. Penalty killed and the Ducks are back to full strength.

Just 7:04 Gibson covers up and Andrew Cogliano makes sure the puck isn’t laying around for a rebound.

Now down to the final minute of the period… Kiefer Sherwood is off to the penalty box for tripping Ryan Reaves. Just 8 seconds remaining in the period the Vegas Golden Knights Goal. It’s a Power Play Goal. It’s William Karlsson with the goal. It’s assisted by Brad Hunt and Jonathan Marchessault. It’s shot from the dot and the rolling puck was difficult for Gibson to get a handle on it to make the save.

The Ducks are off to the locker room trailing 1-0 to the Vegas Golden Knights. The Ducks will start the second period on the penalty kill. The Ducks are spending a good amount of time defending and drawing penalties. Need to kick up a notch in defending Gibson and be aggressive with the puck and attack the net.

The puck is dropped and the PK to Sherwood resumes. Gibson was making save after save DENIED them of having more than one power play goal. They scored… so the penalty wasn’t killed the Ducks are back to full strength.

Just 2 minutes into the period Marc-Andre Fleury is pentalized for tripping Rickard Rakell… the penalty is served by Erik Haula. The Anaheim Ducks are on a JMG POWER PLAY!!! The Ducks didn’t generated anything, it just seemed like they were out of sink on the power play. Penalty killed and the Golden Knights are back to full strength.

The Ducks go on the PK as Josh Manson is off to the penalty box for hooking Tomas Nosek. Gibson shows off his athletic goaltending with save after save and even a save after scrambling to see the puck that was actually underneath his pads. Penalty killed and the Ducks are back to full strength.

Ryan Reaves is a dangerous player especially when… and the Vegas Golden Knights Goal. It’s scored by Ryan Reaves and assisted by Nick Holden and Cody Eakin. Ryan Reaves with the puck and just did a rocket shot on net that Gibson did’t see coming… so in the back of the net it goes. The Golden Knights extend their lead, it’s 2-0 Golden Kinghts.

With just 8.6 seconds remaining in the period… Fleury makes his best save of the night. He covers up denying the Ducks a goal.

The horn sounds and… Rakell was just 2 seconds too late in getting the puck into the the back of the net.

The Ducks head to the locker room down 2-0 to the Golden Knights after 2 periods of play. The Ducks basically need to protect Gibson, get the puck into the zone so they can attack Fleury, and capitalize off chances and rebounds and turnovers in the zone.

THE ANAHEIM DUCKS GOAL!!! SCORED BY #46 BEN STREET!!! ASSISTED BY #4 CAM FOWLER!!! ASSISTED BY #15 RYAN GETZLAF!!! Street is up in front of the crease and does the wrap-around in front of Fleury and into the net the puck goes. The Ducks are on the board but are trailing 2-1 to the Golden Knights.

Click here to see: Street with the wrap-around GOAL

The Ducks go on the penalty kill at 16:49 as it’s Pontus Aberg off to the penalty box for holding Ryan Reaves. There where many shots generated but the puck didn’t find a way past John Gibson because it was GIBBY TIME on that PK. Penalty killed and the Ducks are back to full strength.

Gibson staying strong when he covers up with a scramble in front of him. After the save tempers beging to flare with our 2-way BEAST Ryan Kesler when he pushing and shoving Ryan Reaves away from Gibson which would deny him of a rebound if Gibson didn’t already have the puck covered up.

It’s Isac Lundestrom with a good shot to score on Fleury but is DENIED of the goal to give the Ducks a goal to tie it up.

GIBBY TIME!!! With just 4:33 remaining on the clock Gibson makes his most athletic goal that I’ve seen. He basically does an entire body roll to keep the puck out of the net. The puck hits his mask and the net is off the mourings but strong goaltending keeps it 2-1 when it could’ve been a goal.

Click here to see: Gibson’s terrific save on Smith

Clock is winding down with just 1:36 to go… Gibson heads to the bench for the extra attacker. He went to the bench when the Ducks were in the offensive zone.

John Gibson (thoughts on tonights game): I think we just need to be better. It’s getting old. You see the game. You can see what we’re doing. It’s pretty self-explainatory. We’re not playing to the level that I think we’re capable of playing and I think we’re just being too satisfied with being average.

Unfortunately the Ducks fall short 3-1 to the Vegas Golden Knights in their trip to Sin City. The Ducks head home to Honda Center to take on the Sabres on Paul Kariya Jersey Retirement.