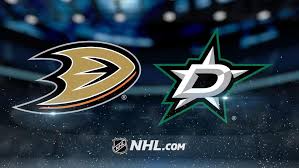 Schenn draws into the lineup… Randy Carlyle has been switching Luke Schenn & Anrej Sustr ever other game for the past few games. Luke Schenn is a physical player and that is what is needed since there was no resigning Bieksa and deserves wearing #2.

With his stellar debut Ryan Kesler is in the lineup and is in the starting  lineup with Rakell and Cogliano.

John Gibson is coming in hot and will be the starting goaltender in tonights game. He starts the game but the third period Ryan Miller is in net for the game.

THe key thing for the forwards to do is to box out Jammie Benn and Radek Faksa so Carlyle made it so a majority of the time he had either Kesler or Henrique on the ice when they were out on the ice.

Here is the starting lineups but tend to change by the coaches during the game. The first known adjustment came up quick when Carter Rowney went to the locker room after his first shift of the game and didn’t return to the game. 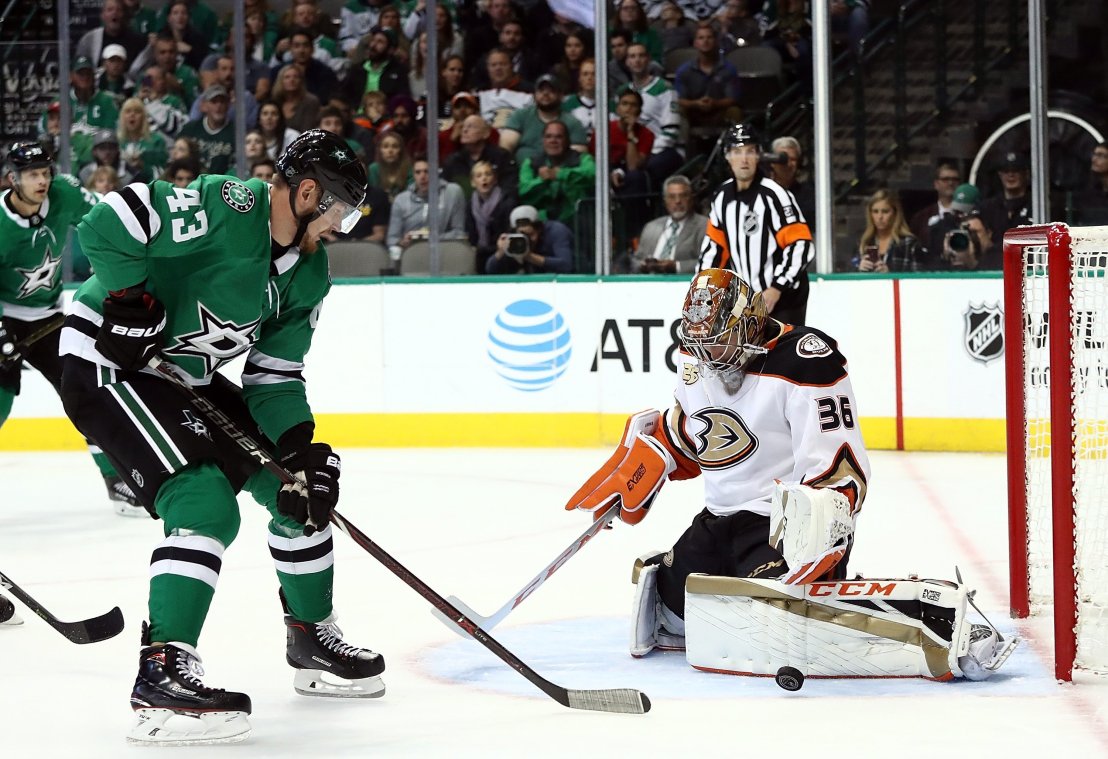 Photo by Anaheim Ducks (Gibby with the early save)

John Gibson just 2 minutes into the period is forced to make a lunging save early in the game.

The Ducks almost score but the puck hits the post and out… tempers started to flare behind the net when our newest BEAST LUKE SCHENN goes after Jason Spezza. a few punches thrown but no roughing or fighting penalty was called.

Now just 11 minutes remaining in the opening frame when… THE ANAHEIM DUCKS GOAL!!! SCORED BY #33 JAKOB SILFVERBERG!!! ASSISTED BY #53 MAX COMTOIS!!! ASSISTED BY #47 HAMPUS LINDHOLM!!! Comtois is in front of the goalie which takes away the line of sight from Anton Khudobin and the snap shot from Silfverberg goes into the back of the net. The Ducks are on the board and take the lead, it’s 1-0 Ducks.

Click here to see: Silfverberg with the Swed GOAL

One player you should stay out of the way from is the BEASTLY JOSH MANSON, Jason Dickinson now know what it feels like when you are in the path of #42 you will get bulldozed which can be very painful.

Jammie Benn is one of the players that the Ducks need to shutdown and that is what Manson did… Manson takes away the passing lane which makes it easier for Gibson to see and cover up the puck.

Just about 5 minutes remaining in the period and the rookie line is out with Manson and Fowler… AND THE ANAHEIM DUCKS GOAL!!! SCORED BY #64 KIEFER SHERWOOD!!! ASSISTED BY #42 JOSH MANSON!!! ASSISTED BY #48 ISAC LUNDESTROM!!! Sherwood makes a nice tip-in off the shot from Lundestrom and makes the puck go into the back of the net. IT’S KIEFER SHERWOOD FIRST NHL GOAL!!! The Ducks extend their lead, it’s 2-0 Ducks.

The Ducks are heading into the locker room with a 2-0 lead over the Stars. The Ducks will go into the second period without Carter Rowney who got injured after his first shift on the ice. John Gibson has been standing tall in the first and will look to keep that up. The defense need to kick it up a notch and keep the Stars away from Gibson. The Ducks need to shutdown Jammie Benn and attack the net and keep it in the Stars zone. 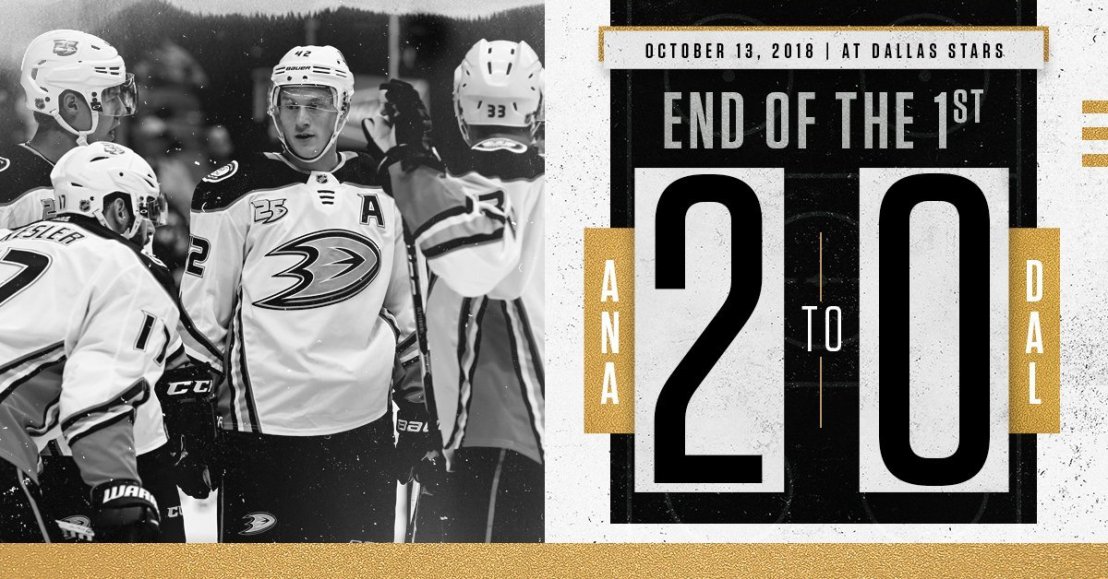 The puck is dropped and the period is underway.

The Ducks go on the penalty kill as Brandon Montour is off to the penalty box for hooking Devin Shore. Spent most of the time defending, the Ducks were only able to get the puck out of the zone 3 times during the PK. The Stars tried but didn’t get anything past John Gibson. Penalty killed and the Ducks are back to full strengh.

Now just 4 minutes later… the Anaheim Ducks are on a JMG POWER PLAY!!! Alexander Radulov is off to the penalty box for hooking Hampus Lindholm. The Ducks got something out of that power play…

AND THE ANAHEIM DUCKS GOAL!!! A JMG POWER PLAY GOAL!!! SCORED BY #14 ADAM HENRIQUE!!! ASSISTED BY #34 SAM STEEL!!! ASSISTED BY #48 ISAC LUNDESTROM!!! Steel shoots the puck at the net and Henrique is there to make that puck find the back of the net. The Ducks extend their lead, it’s 3-0 Ducks.

The Dallas Stars goal. It’s Alexander Radulov with the power play goal. Assisted by Tyler Seguin and John Klingberg. The shot fired at the net hits Gibson in the mask and deflects into the back of the net. The Stars are on the board but the Ducks are ahead, it’s 3-1 Ducks.

*This is where Gibson’s frustration begins to kick in and it could be aimed at the Stars or at the officials – John Gibson and the Ducks really are the only ones that know for sure what sparked and escalated his frustration.*

With 6:08 remaining on the clock Connor Carrick takes a point blank shot at Gibson from up top… The Dallas Stars goal. It’s Connor Carrick with the goal. Assisted by Valeri Nichushkin and Jason Spezza. The Ducks still leading but by 1 goal, it’s 3-2 Ducks.

Dallas looking to tie… Jamie Benn does just that 1 minute later. The Dallas Stars goal. It’s Jamie Benn with the goal. Assisted by Tyler Seguin and Blake Comeau. Benn is at the backdoor to get it past Gibson. We are now tied 3-3.

Gibson’s frustration is unleashed and it’s Tyler Seguin that gets in his way and is the Star that gets it after Gibson takes glove hand and shoves Jamie Benn in the face. Gibson went into BEAST MODE when he had enough… the frustration gave him a penalty for roughing Tyler Seguin. It’s Sam Steel to the penalty box to serve the roughing penalty for teammate John Gibson.

Tyler Segin takes the one-timer shot on Gibson and is completely DENIED by netminder John Gibson.

For the fourth time the Stars find a way to get the puck in the net… Dallas Stars Goal. It’s John Klingberg with the goal. Assisted by Alexander Radulov.  The puck is deflected off Montour’s glove and finds the back of the net. The Dallas Stars take the lead it’s 4-3 Stars

With 1:32 remaining in the period the Ducks go on a JMG POWER PLAY!!! Brett Ritchie is off to the penalty for slashing Kiefer Sherwood. Plenty of shots fired but good goaltending tends to be the story… horn sounds and the Ducks will have 28 seconds remaining in the power play time to start in the 2nd period.

The Ducks are off to the locker room down 4-3 to the Dallas Stars. The Ducks will start the period on the power play. Due to the frustration of Gibson who wanted out of net 5 minutes before the horn sounded because he know he wasn’t on his game… so it’s Miller in net for Gibson for the rest of the game. The Ducks need to find a way to tie this one up and take the lead in this one.

The puck is down and the 28 seconds of power play time begins now. Due to good goaltending the Ducks were unsuccessful on their power play. Penalty killed and the Dallas Stars are back to full strength.

The Ducks were attacking the net and applying pressure on the puck but couldn’t get it past the Dallas Stars’ netminder.

With the clock winding down that is when the physical play is kicked up a notch… Blake Comeau copletely crushes Cam Fowler with a hard hit… Fowler is slow to get up but he is not injured at all.

Just about 2-minutes remaining in the game and Miller is off to the bench for the extra attacker… their goaltender standing strong but they found it… The Dallas Stars goal. It’s Radek Faksa with the goal. Assisted by Jamie Benn and Esa Lindell. They get the puck in the zone and have the game winning goal. 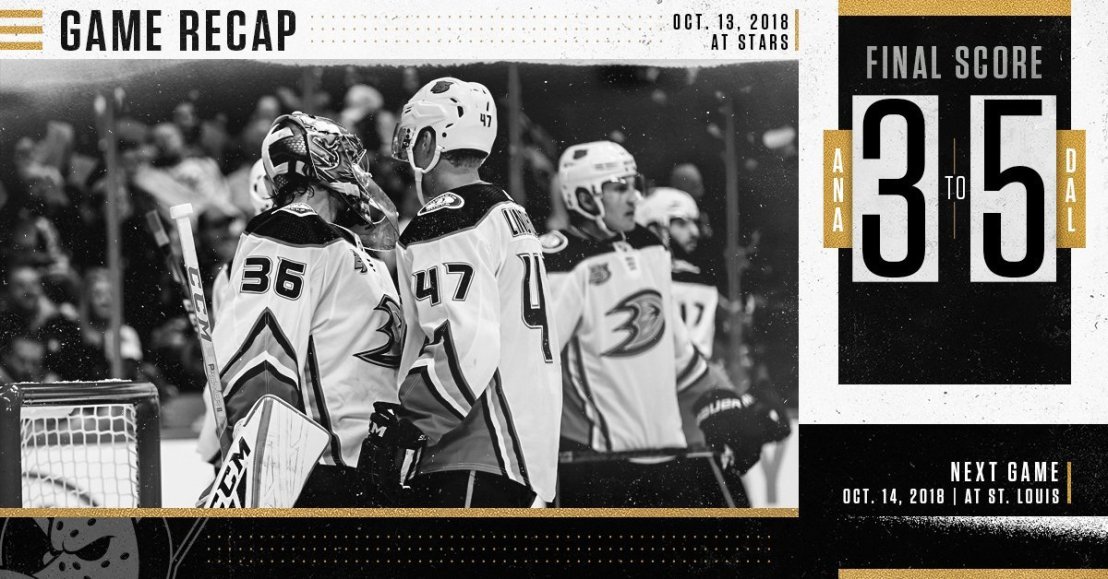 Thoughts on the game from Anaheim Duck players and coaches 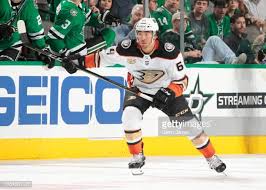 Kiefer Sherwood (on his 1st NHL Goal): It happened so fast. Overwhelmed with excitement. I didn’t score in the preseason or these past games, so I needed to make it happen pretty soon. Great play by Lundy at the top of the blue line. Manson just getting it through. I was fortunate to get a stick on it. 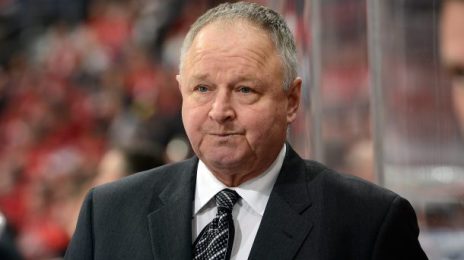 Head Coach Randy Carlyle (on Gibson, who didn’t allow more than two goals in his four previous games): We hung our goaltender out to dry. That’s inexcusable for a hockey club to play and rely on and put a guy in that type of situation, under siege for 20 minutes. It started with the very first shift. They pushed their game up. They pushed the walls, and then we didn’t win enough battles.