The Ducks wrap up their first road trip here in Arizona to take on the Coyotes (who are looking to win some Ducks to eat for dinner). The Ducks are coming off a 5-2 victory over the San Jose Sharks and John Gibson playing at the top of his game and was a big part of that victory. The Ducks will count on Gibson to make it out alive and not end up on the dinner table.

Max Comtois started off the scoring in the Shark Tank and with his family in the stands will bring more out of one of our young rookies.

Coming into the game the Ducks know a few things: 1-they have a rock solid on fire goalteneder John Gibson in net. 2-need to minimize turnovers in their own zone. 3-need to use speed to get to and into the offensive zone, making plays and attacking the net. 4- the Ducks top key players Kesler, Kase, Getzlaf, Perry and Eaves out of the lineup due to injuries, that gives the rookies the chance to show that they deserve to be here playing with the big guns.

We come into this game with some key players on the Injured Reserve the Ducks will lean on their veterans to take lead and Adam Henrique filling in for Getzlaf since he is being place on the top line with Troy Terry and Rickard Rakell. That is the same for the Coyotes, they are missing their big centers and will rely on Clayton Keller to step up while they have player on the IR.

The puck is down and right from the start John Gibson shows the Coyotes he gonna make it hard for them to get the puck to the back of the net.

Just 2 minutes into the period the net is off the mourings behind Gibson and a penalty coming up for the Coyotes.

The Ducks are on a JMG POWER PLAY!!!! Christian Fischer is is off to the penalty box for high-sticking Marcus Pettersson. Our sniper Brandon Montour was in a spot where he had a good chance on goal from the backdoor shot but their wasn’t a clear passing lane to get the puck to Montour to get the puck into the back of the net. Penalty Killed and the Arizona Coyotes are back to full strength.

Gibson standing tall and technically sound and is ready to go as the Anaheim Ducks go on the penalty kill, Andrej Sustr is off to the penalty box for hooking Brendan Perlini. Shot after shotdenied by John Gibson. He covers up the puck and eliminates any rebound chance for the Coyotes. With just 28 seconds remaining on the penalty to Sustr, it’s 4-on-4 hockey as Oliver Ekman-Larsson off to the penalty box for tripping Ryan Getzlaf. Penalty Killed and the Ducks are back to full strength… On that Penalty Kill John Gibson continued to remind us and the Coyotes what time it is… IT’S GIBBY, GIBBY, GIBBY TIME!!!

The Anaheim Ducks are on a JMG POWER PLAY!!!  The Ducks had chances but couldn’t capitalize off that power play. Penalty Killed and the Coyotes are back at full strength.

We remain on Gibby Time when Derek Stepan gets a breakaway it looked like it was good but forgot what time it was because shot DENIED BY GIBSON.

The Ducks head to the locker room scoreless against the Coyotes. After 20 minutes being scoreless with #36 JOHN GIBSON playing at the top of his game, being the athletic and technically sound goalie that he is. The second half of this period the Ducks were way more aggressive with the puck, the Ducks need to continue that in the second period to get on the board and take the lead in the game.

New period but it’s GIBBY TIME right from the start with a big save by John Gibson. He is on fire and is making rock solid just like this one.

It’s a new game but same scoring start… AND ANAHEIM DUCKS GOAL!!! SCORED BY #53 MAX COMTOIS!!! ASSISTED BY #4 CAM FOWLER!!! ASSISTED BY #33 JAKOB SILFVERBERG!!! Comtois is ahead of the play and with open ice gets the puck… it’s a breakaway 5-hole goal by the 19 year old. Max Comtois gives the Ducks the lead, it’s 1-0 Ducks.

The Ducks head into the locker room with the 1-0 lead over the Coyotes. Comtois gets us on the board with skill and speed. John Gibson is clearly on fire with his athletic saves and being technically sound in his positioning to save the pucks. The way he saves pucks, he just makes it look so easy but it has become challenging for the Coyotes to score with a strong netminder in net for the Ducks for this game.

It’s the third period and the period starts up with the on fire Gibson coming up with the save on Stepan but he is DENIED by John Gibson.

Gibson is DENYING any puck that comes his way including a beautiful butterfly blocker save that prevented the shot and rebound chance for the puck to get to the back of the net.

Looks like it’s penalty killing time for the Anaheim Ducks as Jakob Silfverberg is off to the bench with a tripping call on Jason Demers. Both Silfverberg and Randy Carlyle not happy with the call, it didn’t look like Silfverberg tripped Demers. With a strong Gibson in net is exactly what prevented the Coyotes from capitalizing off their power play. Penalty Killed. The Ducks are back to full strength.

NOTE: Players with speed was a focus for GM Bob Murray when putting the team together  and it really showed in this game especially with the goal of the gameby rookie Max Comtois (only 19 years old).

Thoughts on the game from the Anaheim Ducks players and coaches:

Cam Fowler (on Max Comtois): He’s definitely brought a lot of energy. All of our young players are expected to make a big impact on our team early. They’ve done a great job of that. That was a big goal for our club. Luckily it held up.

Cam Fowler (on John Gibson): He’s been incredible. All the saves he’s made. He’s the reason why we have four points right now. He’s been our best player by far. 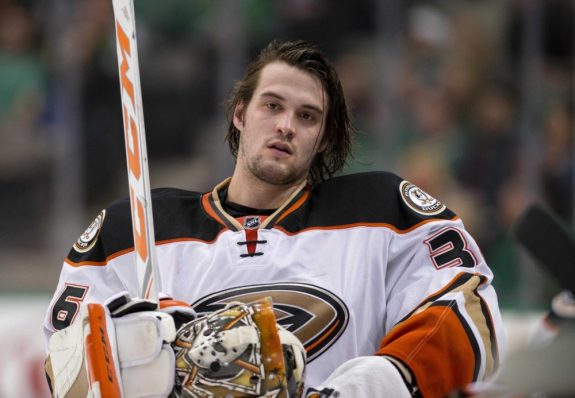 John Gibson (on the game): We’ve been executing defensively pretty well. We stick to our game plan on the penalty kill, and kept them to the outside pretty much. They’re going to get a shot, and that’s when they need me. I was there to do that.