The Ducks come into the Shark Tank (SAP Arena) for the first time since the Ducks got swept by the Sharks in Round 1 of the Stanley Cup Playoffs last season. The Ducks need to win this one so they can show that they can come out of the Shark Tank ALIVE and VICTORIOUS. With 4 big players out of the lineup due to injuries (Ryan Kesler, Corey Perry, Patrick Eaves, and Ondrej Kase) gives the rookies to some time to shine and step up to the plate and help the Ducks get the first win of the season. Our rookies, Max Comtois (19yr old), Sam Steel (18yr old), Kiefer Sherwood (23yr old), Isac Lundestrom (19yr old), this will be their first NHL career game.

The Ducks are without Kevin Bieksa (who hasn’t signed with any NHL team). He was a big aggressive and physical player so the Ducks blueliners will need to kick it up a notch when it comes to the physical aggressive play. In my mind there are a few Ducks that are and have been capable of the physical play. The 2 aggressive D-man on the ice would probably be Josh Manson and Hampus Lindholm. At times they don’t look intimidating but a big hard hit into the boards, on the ice or just shoving players tends to bring out the BEAST outside and that is felt or known to the players all around them.

Our number one goaltender John Gibson (who is one of the NHL’s best active goaltenders). It will be John Gibson to defend in the net for the Anaheim Ducks. It didn’t take him long to show the San Jose Sharks that tonight they are playing on GIBBY TIME right from the start of the game. He showed he’s playing at the top of his game so good to see him play like this right at the start of the season. The thing that makes John Gibson stand out is that he is a very athletic and technically sound netminder.

The crowd is fired up to see Erik Karlsson in his Sharks debut as the puck is dropped and the first period is underway. It didn’t take long for the Ducks to silence the Shark fans at SAP Arena…

It took just 40 seconds for rookie Max Comtois to make a difference in his first NHL career game… AND THE ANAHEIM DUCKS GOAL!!! SCORED BY #53 MAX COMTOIS!!! ASSISTED BY #14 ADAM HENRIQUE!!! Henrique gets the puck and spots Comtois alone with open ice and Comtois on the breakaway shoots and it is in the back of the net. It is his first NHL career goal! The Ducks take the lead early in the game, it’s 1-0 Ducks.

Just 4 minutes into the game (at 17:57 in the period) Gibson showed everyone it’s GIBBY TIME with a flury of saves that showed off his athleticism. He DENIED the San Jose Sharks with the shots on goal that ended in a beautiful butterfly save.

Click here to see: Gibson showing off with a flury of saves

The Ducks are on a JMG POWER PLAY!!! There is time remaining on the penalty to Joe Thorton (about 1:50 remaining). Lots of chances but the Ducks couldn’t capitalize off of this power play.

It’s now 4-on-4 hockey as Pontus Aberg is sent to the penalty box for goaltender interference with Matin Jones behind the net. The Ducks will go on the penalty kill in 1 minute. Jakob Silfverberg had a good chance at net but Jones saw him coming. Penalties Killed, shots DENIED by Jones and Gibson.

The Shark Tank comes alive when the San Jose Sharks tie up the game with a goal by Evander Kane. He gets the puck up over the top of John Gibson and into the back of the net. It’s now tied 1-1.

The horn sounds and the Ducks are off to the locker room tied up at 1. The Ducks spent a good amount of the period defending in their own zone. Gibson standing tall making it a challenge for the Sharks to score. This period he DENIED 10 of 11 shots. We are on the board thanks to the rookie Max Comtois on the rush for his breakaway goal and his first NHL career goal. The Ducks need to apply a lot more pressure to get more time in the Shark zone and shooting the puck at Sharks netminder Martin Jones. 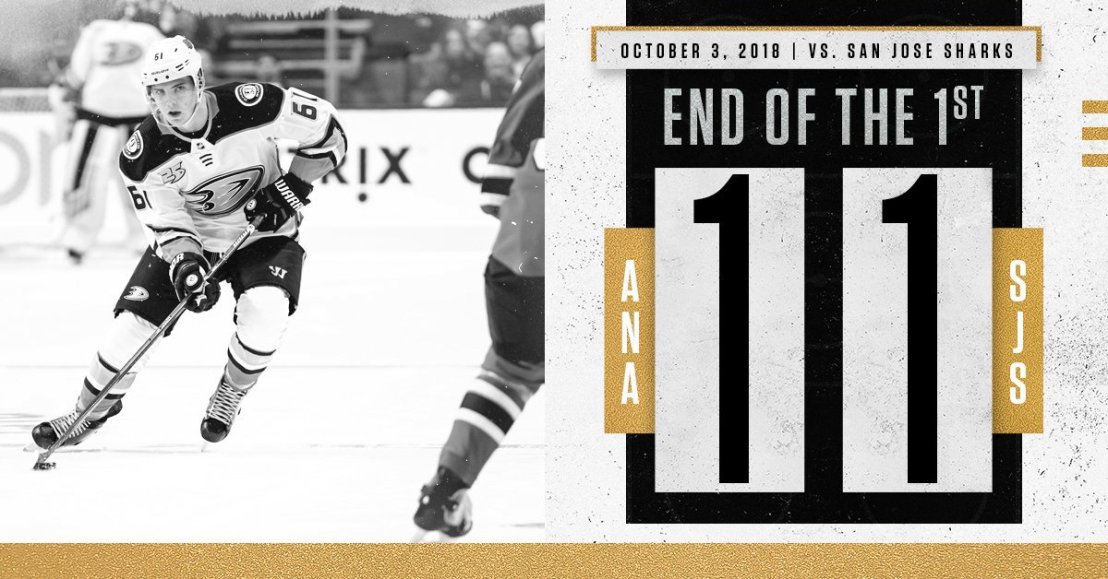 The puck is dropped for the second period is underway and a majority of the first half of the period was spent in the Anaheim zone. Many shots fired but DENIED due to good goaltending by Gibson and Jones.

Jakob Silfverberg gets a good chance on a breakaway, he tried to go top shelf off a backhanded shot but his bing bang opportunity was denied by Martin Jones.

The BEASTLY Josh Manson became unleashed on Marcus Sorensen with a few big hard hits into the boards. With the second hit Manson made on Sorensen sent him to the penalty box for tripping Marcus Sorensen. It is a bad call that was made where Sorensen fell to the ice and didn’t look like he was tripped by Ducks blue-liner Josh Manson. Nothing but Ducks netminder being on GIBBY TIME with denying puck after puck that came his way but the Sharks didn’t get one single shot past John Gibson on their power play.

With 3:36 left on the clock Evander Kane is off to the penalty box for tripping Josh Manson… THE ANAHEIM DUCKS ARE ON A JMG POWER PLAY!!!

The San Jose Sharks score on their penalty kill… Tomas Hertl makes a shorthanded shot off a turnover and it finds a way past Gibson and into the back of the net. The Sharks take the lead for the first time in the game, it’s 2-1 Sharks.

They didn’t have the lead for long… AND THE ANAHEIM DUCKS GOAL!!! IT’S A POWER PLAY GOAL!!! SCORED BY #67 RICKARD RAKELL!!! ASSISTED BY #33 JAKOB SILFVERBERG!!! ASSISTED BY #15 RYAN GETZLAF!!! The Sweds are back at it again, Silfverberg finds the tape of Rakell on the backdoor to get it in the net and past Martin Jones. RickRakAttack is back and he tied things up. It’s now tied 2-2 with the PPG by Rakell.

Click here to see: RickRackAttack is BACK on the PPG

The Ducks off to the locker room tied but it’s tied at 2-2. A big reason we are tied at 2 after 2 periods of play is all because #36 John Gibson standing tall, athletic, and is technically sound in net. he denied 14 of 15 shots on goal in the second period. The Ducks need to get aggressive with the puck, shutdown their defense to get in their zone to shoot at Martin Jones to get the lead in the game.

The third period is underway and right from the puck drop is when GIBBY TIME BEGINS he is DENYING pucks left and right over and over again.

With 12:02 on the clock… Martin Jones didn’t see our sneaky sniper come in the zone with the puck… AND THE ANAHEIM DUCKS GOAL!!! SCORED BY #26 BRANDON MONTOUR!!! IT’S AN UNASSISTED GOAL!!! Montour gets the puck and makes a backhanded shot at net and it goes top shelf over the shoulder of Jones and into the back of the net. Ducks take the lead over the Sharks, it’s 3-2 Ducks.

The Ducks go on a JMG POWER PLAY!!! Logan Couture is off to the penalty box for interference on Kiefer Sherwood. The Ducks capitalized off the power play…

ANAHEIM DUCKS GOAL!!! IT’S A POWER PLAY GOAL!!! SCORED BY #14 ADAM HENRIQUE!!! ASSISTED BY #33 JAKOB SILFVERBERG!!! ASSISTED BY #67 RICKARD RAKELL!!! It’s a tick tack toe play from the Sweds and Henrique gets the puck through the wickets of Martin Jones. The Ducks extend their lead, it’s 4-2 Ducks.

Click here to see: Henrique cashes in off the Sweds tick tack play

With 2:32 remaining in the game Martin Jones is off to the bench for the extra attacker. They couldn’t find a way to get the puck past Gibson.

Time coming down to 23 seconds left in the game when the puck gets to Carter Rowney… AND THE ANAHEIM DUCKS GOAL!!! SCORED BY #24 CARTER ROWNEY!!! IT’S THE GAME WINNING GOAL!!! It’s an empty netter and Rowney’s first goal as an Anaheim Duck.

Thoughts on game from the Anaheim Ducks players and coaches:

Max Comtois (on if he could’ve scripted it any better): I wouldn’t have believed it if you said it to me before the game. It was a good play by Rico to poke the puck to me, and I found a way to put it into the back of the net. Really happy. I didn’t want to shoot it off the pad or miss that chance. It was a great play overall. I’m really happy to get this one out of the way.

Adam Henrique (on the power play): To any great power play, getting the puck moving around kind of gets the PK moving around. If you can take advantage of that, it pays off. You need a couple good passes to get set.

Thoughts on the game from the San Jose Sharks players and coaches: 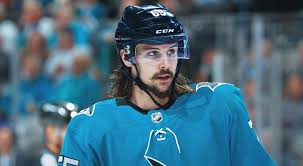 Erik Karlsson (on the game): “We didn’t play great, but we didn’t play poorly,” Karlsson said. “I think as the game went on we elevated our game and we took over more and more. That’s what we were looking for. Now we’ve just got to build on it.”

Erik Karlsson (on Ducks power play): “They scored a beautiful goal on the power play, there’s nothing we can do about that one,” Karlsson said. “Stuff like that is going to happen.”

Head Coach Peter DeBoer (on Erik Karlsson & the game): I thought he was good. We did a lot of good things. We gave up 10 or 12 shots through most of the game. Created a lot of chances ourselves. Didn’t finish. Didn’t extend the lead when we had opportunities to, and that’s what happens.”