It’s the first pre-season HOME OPENER but it didn’t end up as a big win the 7-3 loss… it was a good game would’ve been a better one if it was the Ducks that scored 7 goals and the Sharks had 3 goals.

There are good things that it is about preseason games… they don’t count, games where rookies can prove they belong in the NHL, and time to work on the kinks before their opening game, which is on October 3rd for the Ducks.

Some of the vetrans made a mark in this game that showed us why they are part of the Ducks organization. Kase using his speed and scored 2 goals, Rakell showed his skills on the ice and started looking like a strong leader with the way he played on ice with the rookies, and the agitator Corey Perry showed he still got it and he had numerous shots and chances but he just didn’t capitalize off his good shots on goal. Perry also showed his skills and speed are still there. Rakell, Kase and Silfverberg looked to me like they have a little bit of a young 2003 Corey Perry in them with the way they skate with speed and score when they are on the ice.

Ryan Miller started in the first half of the game before switching to young goaltender Jared Coreau so he can get a taste of playing in net for the Ducks.

The Swed player, Rakell is off to showing of his skill to get the Ducks on the board but gets tripped up with a few sharks in his way of getting in a scoring position.

It’s penalty killing time for the Ducks as Ben Street is off to the penalty box for holding the stick of Alexander True. Ryan Miller denies the Sharks to score and the penalty is killed.

Just 6 minutes into the game THE ANAHEIM DUCKS GOAL!!! SCORED BY #25 ONDREJ KASE!!! ASSISTED BY #45 ANDY WELINSKI!!! ASSISTED BY #14 ADAM HENRIQUE!!! Henrique finds Kase at the top of the net and the puck finds the back of the net. The Ducks take the lead, its 1-0 Ducks.

The Sharks respond to Kase and tie up the game. The San Jose Sharks goal. It’s Antti Suomela gets the Sharks on the board. This is a goal the Ducks wish they could get back, goes over the top of the glove and into the net it goes. We are tied at 1-1.

Click here to see the goal: Sharks goal- tip in off faceoff by Suomela

Just with 3 minutes left on the clock we get a look at the vintage Silfverberg… AND THE ANAHEIM DUCKS GOAL!!! SCORED BY #33 JAKOB SILFVERBERG!!! ASSISTED BY #42 JOSH MANSON!!! The Swed gives the Ducks the lead with a high glove side shot that finds the back of the net. Ducks have the lead over the Sharks, it’s 2-1 Ducks.

Kase had a good chance for a breakaway but with too much speed couldn’t get the puck to the back of the net.

The Ducks take the 2-1 lead as they head into the locker room after 20 minutes of play. Rakell really showed some leadership skill with his creative play and fast pace and good puck handling was hard to miss that is a good sign for the season since it is only game 2 in preseason.

The Sharks got a 2-on-1 break and the Sharks tie it up again. The San Jose Sharks goal. Scored by Kevin Labanc. We are not tied 2-2.

The Sharks but ask Kase what he has to say about that…. AND THE ANAHEIM DUCKS GOAL!!! SCORED BY #25 ONDREJ KASE!!! ASSISTED BY #90 GIOVANNI FIORE!!! ASSISTED BY #14 ADAM HENRIQUE!!! Kase gets the puck and with speed and open ice he got a breakaway goal and this breakaway shot made it past Dell and into the back of the net. The Ducks take the lead, it’s 3-2 Ducks.

The Ducks go on the penalty as Max Comtois for cross checking Ryan Merkley. The Ducks had control of the puck and the Sharks had no shots on goal during the penalty goal. Penalty Killed without Miller getting to touch the puck.

Corey Perry has been so good but the times he had a really good shot on goal he couldn’t get the puck to calm down when he was in his office which is known to goalies that when Perry is on the ice they will see him face to face, his hot spot is right on top of the goalie crease but he could not get that puck behind Dell.

Oh No the Sharks tie up the game again. The San Jose Sharks goal. It’s Radim Simek with the goal. This was a bad goal for the Ducks. The game is tied 3-3.

Randy Carlyle uses 2 goalies in each preseason game and Ryan Miller heads to the bench and it’s the tall Jared Coreau in net for the second half of the game.

Just moments after the goalie switch the Sharks goal, it is sometimes difficult for the goalie to come in and getting up to game speed. It’s Jacob Middleton with the goal. For the first time in the game the San Jose Sharks take the 4-3 lead.

The Ducks trail 4-3 heading into the locker room after 2 periods of play. After the goal by Middleton the Ducks looked like they were playing pond hockey. Corey Perry, Rickard Rakell, and Jakob Silfverberg had so many chances but couldn’t get the shots in front of Dell to go in. Struggling scorer in the past, Corey Perry had so many good looks and chances but the puck wouldn’t settle on his stick to get the puck to the back of the net.

The period starts off a little rocky on the Duck side. The Ducks go on the penalty kill as Anton Rodin for slashing Radim Simek. Nothing happened… Penalty Killed.

The San Jose Sharks get 3 goals in a row….

…and the San Jose Sharks extend their lead. Sharks goal, it’s Lukas Radil with the goal. He got the rebound off a good save by Coreau he couldn’t get to the puck quick enough to prevent the puck from finding the back of the net. It’s 5-3 Sharks with 8:30 remaining in the game.

The San Jose Sharks goal with 4 minutes remaining on the clock, it’s Joonas Donskoi with the goal. The Sharks extend their lead, it’s 6-3 Sharks.

The San Jose Sharks score with 3 minutes remaining on the clock, it’s Antti Suomela with the goal. The Sharks on a counter attack with an open net makes it difficult for Coreau to make the save. The Sharks extend their lead, it’s 7-3 Sharks.

The ANAHEIM DUCKS ARE ON A JMG POWER PLAY!!! Joonas Donskoi is off to the penalty box for hooking Adam Henrique. Dell denied each puck that came his way which prevented for the Ducks to try to catch up with just a few minutes remaining in the game.

Anaheim Ducks players and coaches thoughts on the game:

Josh Manson (thoughts on tonight’s loss): At the end of the day, it comes down to structure and work ethic. They played a better structure than we did. That’s why they won the game. 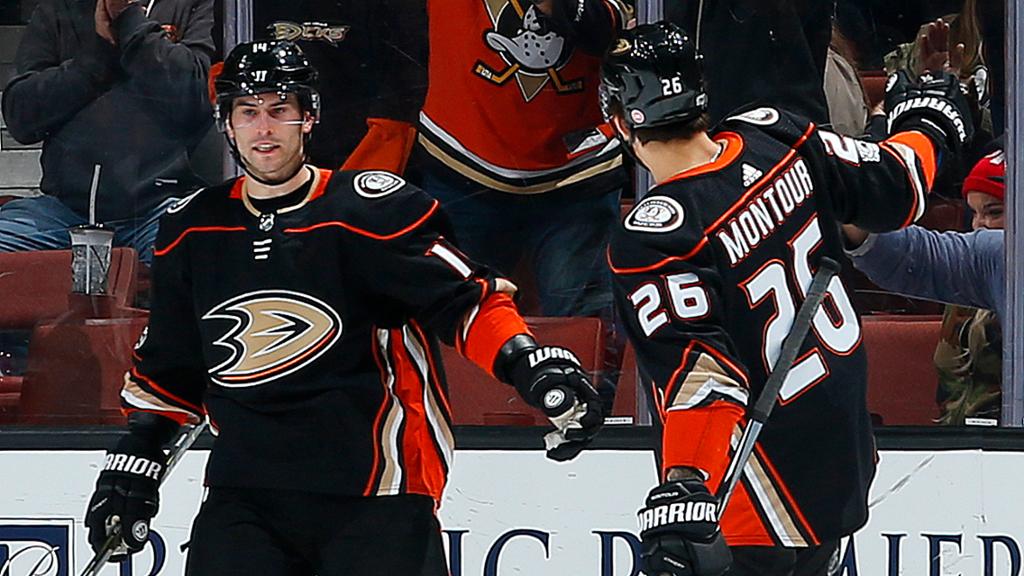 Adam Henrique (on tonight’s game and the instant spark of chemistry with Kase): It’s a matter of dialing it in and finding combinations. Lots of guys’ first games. Trying to get the kinks out. Trying to get things dialed in the right direction.

Head Coach Randy Carlyle (on tonight’s loss to San Jose and the performance of several young Ducks): It’s a test for our young players to play at this level. There isn’t a lot of time and space out there. They found that out tonight.

Photos by The Anaheim Ducks, NHL, and panow