Physical and Fighting are two words that are clearly known to Kevin Bieksa. (photo by HockeyFights.com)

Rival Time are the words that bring out the best, physical, and emotional side of the game out in the Anaheim Ducks. This was one of the best games they played so far this season, but the Ducks didn’t come out on top in this rival game. They put everything out on the table in this rivalry matchup but the Ducks fell to defeat in the shootout rounds. The Ducks’ next stop on their road trip is Chicago, that is a game where the Ducks are looking to turn the tables after a very physical and pentalized for fighting game they had against the Los Angeles Kings.

The Ducks go into Staples Center without the assistance of Rickard Rakell due to injury he is listed as day-to-day and is not on injured reserve. According to the Ducks, Rakell will not be with the team for the start of the road trip but he may join the team sometime in the middle or end of the road trip.

Miller Miller Miller Time… That’s right it’s Miller Time. Ryan Miller gets the start which gives Gibson a break for this game, a night off is exactly what is needed after playing night after night since the Sharks game on November 20th. 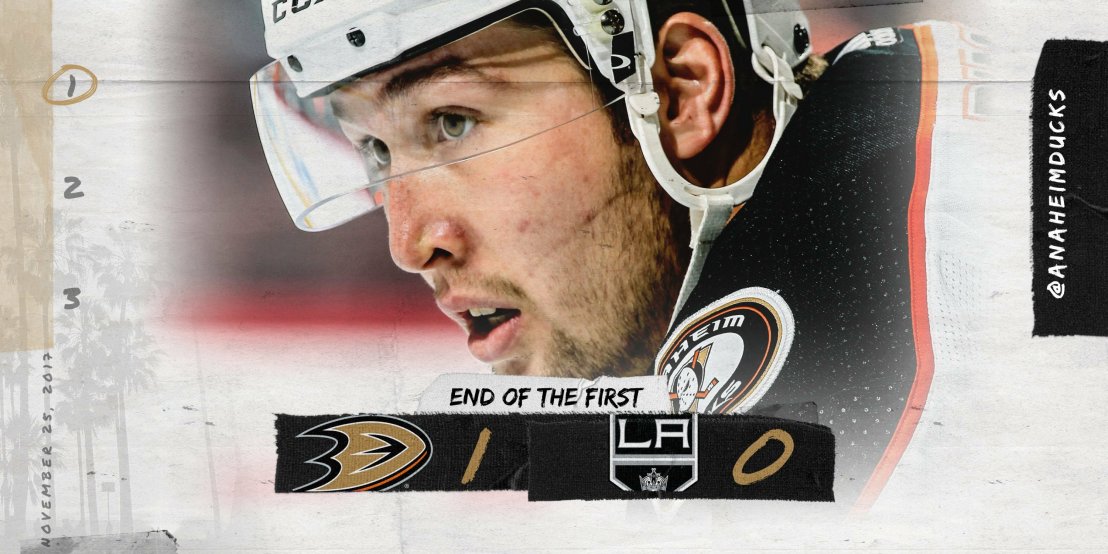 When it’s Ducks vs. Kings one thing that is always going to be in the game is a lot of emotions and a lot of physicality between these two teams. It only took Perry one minute to say hello to Jonathan Quick and I feel that Perry was under his skin the entire game.

With just 5 minutes played in the game 2 fights and 1 hard hit. Mike Liambas and Kurtis MacDermid go at it, some say the reason behind this fight is for payback…a revenge fight for what he did to Ondrej Kase who hasn’t been in a game since the last time these teams met back on November 7 and has missed 8 games and counting since he hasn’t been in the lineup since then. MacDermid and Liambas get a 5 minute major penalty for fighting, so off to the penalty box they go.

Then the Kings out of the blue decide to hammer Wagner with a hard hit on the boards in front of the Anaheim bench. A call for boarding could have been called but there was NO CALL made. Why do ZEBRAS have to be so blind?

It’s #7 fighting #7- Andrew Cogliano and Oscar Fantenberg go at it and Cogs just nails him and down to the ground Fantenberg goes. Both players recive a 5 minute major penalty for fighting.

The Kings send Derek Grant to the locker room. BLIND ZEBRAS. Dusitn Brown clearly trips Derek Grant but there was NO CALL made by the officals even when one was standing right in front of Brown tripping Grant. Good news is that Derek Grant was in the locker room for about a minute and that is a good sign for the Anaheim Ducks.

Penalty Killing Time. Chris Wagner is off to the penalty box for interfence with Tanner Pearson. During the Kings power play Miller takes a hit to his mask that unlatches and he is off to the Anaheim bench to switch masks…that’s right he has 2 goalie masks.

Before the penalty to Wagner ends. A very beastly Kevin Bieska throws a “Superman Punch” on Andy Andreoff…one punch was all that it took for Andreoff to hit the ice.

*Superman Punch is a term used in MMA. Which means both feet leave the ground for a split-second when throwing the punch*

Miller Time! Big save by Ryan Miller, he is looking good in the net..calm, comfortable, and really focused in the zone.

Time for the Ducks to kill another penalty, with manson off to the box for holding Tanner Pearson. And penalty killed…thanks to the ‘Face-off Ace’ Antoine Vermette and Ryan Miller looking confident with the huge saves.

The Anaheim Ducks are in the lead, they head to the locker room with the lead and with the Kings trailing by 1. It’s 1-0 Ducks. The Ducks need to keep on doing the same thing in the second and keep the momentum and physicality going.

The Ducks start the period with the Beasts of the Anaheim Ducks (Wagner, Bieksa, Manson and Ritchie) making some big and hard hits on the Kings. And around the same time the Ducks had Jonathan Quick swimming around saving puck after puck.

MacDermid wanted to start something with Perry as they were exchanging words, Perry just laughed and moved on. I got the feeling that Perry said something along the lines do you really want a piece of me. Perry is the one of the last Ducks I would want to start something with especially knowing and having in mind the fight between Corey Perry and Jonathan Quick.

And the Ducks are on a power play as Kurtis MacDermid is off to the penalty box for slashing Antoine Vermette. Unfortunately for the Ducks the Kings killed the slashing penalty on MacDermid.

The Ducks head to the locker room 1-0 since the Kings weren’t able to get one past Ryan Miller. The Kings have 20 minutes to score to tie or win and the Ducks just need to keep on doing what they did in the first two periods. 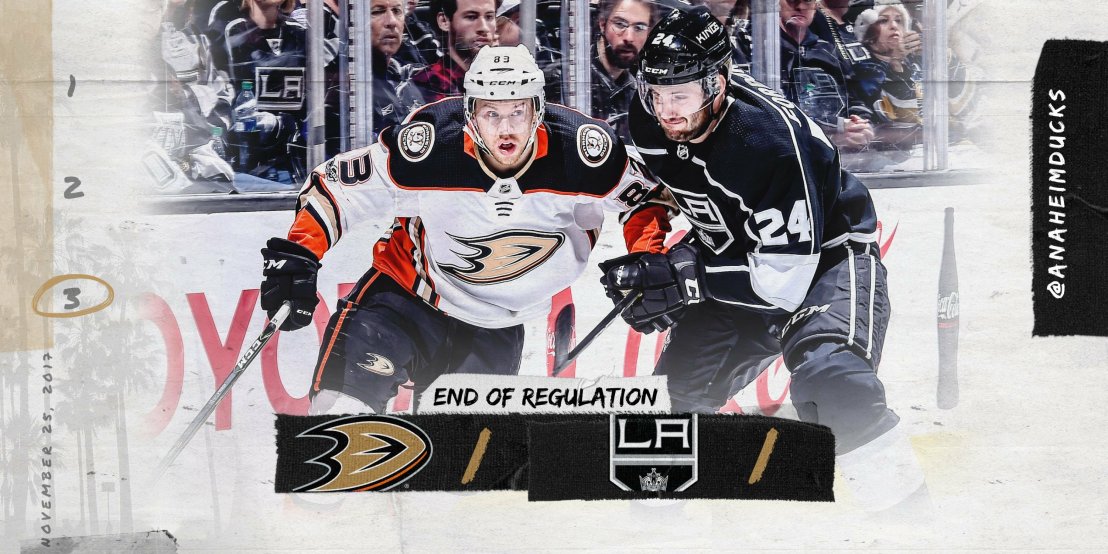 When it’s Ducks vs Kings each period starts off pretty much the same way. Big save Miller and a BIG hit by Josh Manson. Goaltending is the main reason why the score is so low going into the third period. With a nice shot on net by Jakob Silverberg he just gets robbed by Kings netminder Jonathan Quick.

The Anaheim Ducks are on the power play, the Kings are penalized for ‘too many man on the ice’ penalty. Miller on fire during the power play and Quick denying puck after puck the Kings were able to kill their penalty.

With about 4 minutes left in the third period Miller makes a beautiful glove save, he was in the right place at the right time to prevent the puck going into the net.

Down to less than 2 minutes, Quick is off to the Los Angeles bench for the extra attacker to try to get on the board forcing the game to go into overtime.

Heading into overtime, Los Angeles Kings Goal. Scored by the number 23 Dustin Brown. He got the Kings on the board and now it’s all tied up 1-1.

During the 5-minute overtime period there was stellar goaltending by both Miller and Quick. At one point the Kings got an advantage when Brandon Montour is off to the penalty box for high-sticking Dustin Brown.

No goal during overtime which means it’s shootout time.

This is how the shootout went:

And the Los Angeles Kings win it in the shoot out.

Here is the full video of Overtime and the 4 shootout rounds:

Thoughts on the game from Anaheim Ducks players and coaches:

Kevin Bieksa (on the game): Our d-zone was pretty good tonight. We had a little bit too much of it in the second period, but we kept a lot of the shots to the outside. We played good enough to almost get the shutout, but they got one. Losing in the shootout sucks. We all know that.

Kevin Bieksa (on the rivalry): This team brings out the best in us. There is a pretty strong rivalry there. The emotions are pretty high right off the bat. You got everybody going. It was a great game. It was physical. It had a little bit of everything. You could tell we wanted this one. You win it in a shootout or overtime and you feel like a million bucks, and when you lose, you feel like a zero. Right now, we try to take away the positives and head out east and make some noise.

Ryan Miller (on the game): Our intensity was there. We were engaged from the puck drop. Both teams were really committed to playing a hard game.

Ryan Miller (on the road trip): We need everything we can get. We know what we got coming down the barrel. Effort like tonight will go a long way. It’s frustrating to walk out of here without two points, but I thought we fought really hard. It’s the kind of game we needed. We’ll see if we can keep it going.

Head Coach Randy Carlyle (on the game): I thought our work ethic was strong. I thought our compete level was where it needed to be. These are the types of games that separate men and boys. I thought our hockey club competed as hard as it has competed in any game this year.

Head Coach Randy Carlyle (on maintaining the same level of intensity and work ethic): The compete level, structure, work ethic, our track and forecheck, all those were positives for our hockey club. Now we have to find a way to maintain that as we play more games on this road trip. We’re short-staffed on personnel, but credit to the guys who are here. It’s not an easy task to play in situations that maybe they haven’t been in.