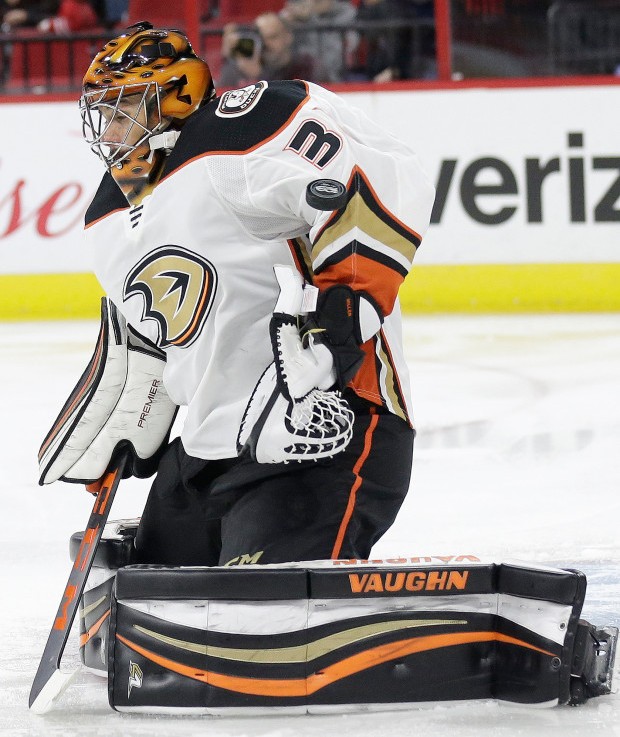 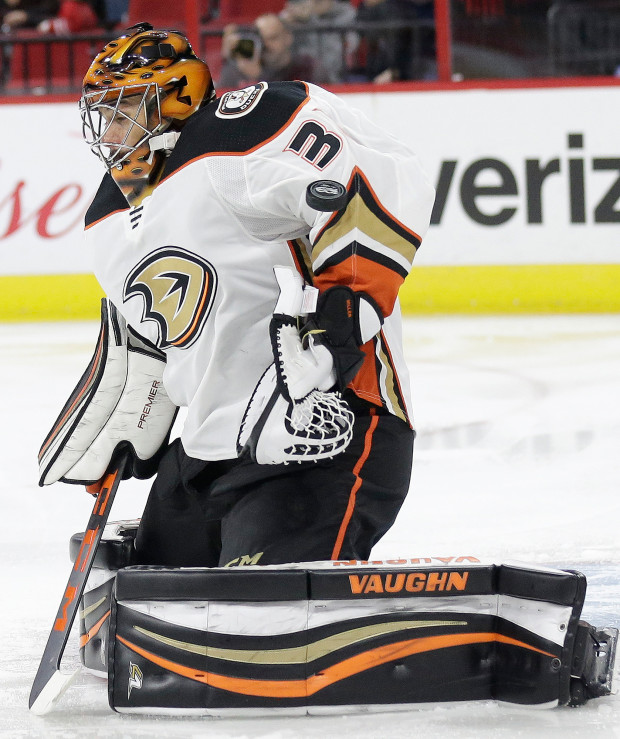 Ryan Miller finally made his NHL debut with the Anaheim Ducks on Sunday and he really did show the Ducks what kind of goalie he is and that they can count on him.

Ryan Miller is a veteran goalie which was what the Ducks were looking for during the off-season. The Ducks were looking for a veteran goalie that would be a good back-up goalie to the main-man in goal John Gibson. Miller has played “14 NHL seasons with Buffalo, St. Louis and Vancouver. That included a prolonged stretch where he was among the best goalies in the game, punctuated by a Vezina Trophy and an Olympic silver medal for Team USA in 2010.”

According to the Anaheim Ducks, Ryan “Miller highly anticipated debut in Anaheim was delayed by a wrist injury suffered early in the preseason that kept him sidelined for nearly a month.”

Ryan Miller’s thoughts on his injury:  They told me it was something that had been there for awhile, and I aggravated it. I never really felt it was significant. As a goalie, you get hit in the hands a lot. Even looking back into last season, I was trying to think back on whether I had anything that didn’t feel right.

Ryan Miller did say that he felt fine throughout the summer, during training and even while enjoying the occasional round of golf.

Ryan Miller on finally getting into the game: It definitely was a long buildup, and I was anxious to get it going. Joining a new team and not really being able to get out there and get into a game for awhile was something you think about a little bit too much. If I wasn’t feeling better, I would have been more resigned to it. But I felt like I was really close and it just kind of kept getting delayed, delayed, delayed. I’m happy to get to a point where I felt like it was good enough to go and I could contribute.

More of Ryan Miller’s thoughts: You hinge at the wrists a lot in golf, and I felt nothing wrong. Then all of a sudden one day, it just grabbed me. The morning of one of our preseason games just didn’t go well for me, and I thought I had to play a game to see where I’m at. It just really didn’t feel good, so I had to back down. I’m glad we didn’t have to do anything drastic, but it is about maintenance and keeping my eye on it as the season goes.

Ryan Miller got to see his first NHL game with the Ducks on Sunday when they played the Carolina Hurricanes, during the game he made 34 saves, 9 saves in the overtime period, and the 3 shootout saves. That game was apparently special to Miller because after saving the puck from Sebastian Aho’s shot in the final shootout round, “Miller pumped his fist three times, then skated over to the boards to scoop up the puck as a souvenir.”

Ducks reporter Adam Brady said, “It was something Miller no doubt envisioned when he signed with Anaheim and finally got the chance to work closer to the West Hollywood home he has shared for the last seven years with his wife, actress Noureen DeWulf, and their young son, Bodhi.”

Ryan Miller on the silver-lining with living in California: The distance between Orange County and LA can seem lengthy with typical Southland traffic, “but it’s better than being hours away by plane” Ryan Miller is referring to his time when he was in Vancouver, St. Louis, and Buffalo. “It’s not perfect, but you can’t ask for a better situation.”

The silver-lining to his injury:  The one silver-lining of his early-season injury was that it gave him more time to spend around the house. “My wife was really busy at the time, so it was a chance to be around and help out with our son a little more,” says Miller. “There are little things you just try and do to make life a little normal, but we’re back into hockey now, and that’s what we know.”

Head Coach Randy Carlyle (on Ryan Miller being healthy and goaltending): “Now that Miller is healthy, he will compete for time in net with Gibson rather than being deemed a backup. The “1A and 1B” mindset is something Carlyle has preferred for a long time, and it’s something the Ducks expected from the day they signed Miller.”

Head Coach Randy Carlyle (on Ryan Miller): We felt that obviously he was a guy that has history of stopping the puck, and he wanted to play for us. He wanted to come to Anaheim and play. He’s got ties in L.A. He’s got a home there. And it was a natural for him to come in.

‘It’s been a long time coming for Miller, for him to get healthy enough to truly feel like a part of it all, being part of the team and being an official Anaheim Duck.

Final thoughts from Ryan Miller: You sign somewhere and you want to make an impact, or at least build some trust with the guys. As a goaltender, that’s something I think is really important, and I’m really happy to finally get going.

I feel confident enough to say that I think Ryan Miller is really going to enjoy being a Duck and living in California with his family. I’m looking forward to see him contribute more and more throughout the season, just like he did for his team on Sunday.

It’s Miller Time and he is finally healthy and ready to go play some hockey, I wonder when he will start in a game again, I guess only time will tell when that happens.