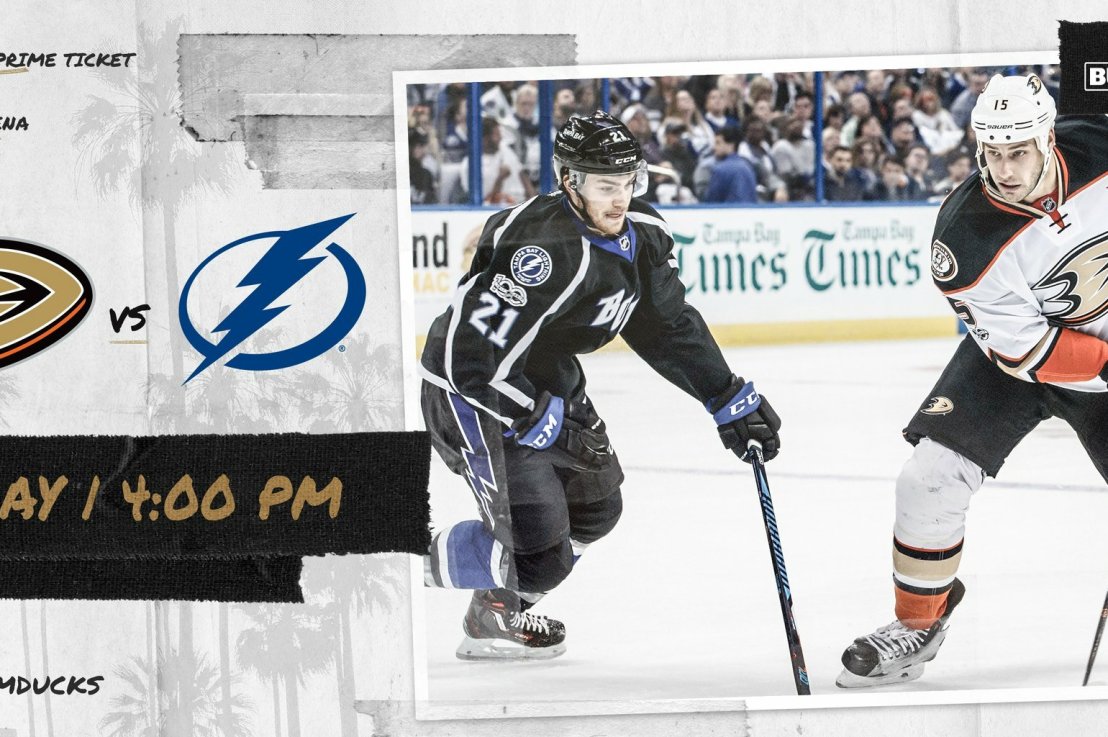 The Anaheim Ducks ended up on top with a 4-1 victory defeating the best team in the league. It almost took 11 years but the Ducks finally found a way to defeat the Tapa Bay Lightning once and for all. A big part of that is what Randy Carlyle told Ryan Getzlaf how to play. He wanted Getzlaf on the ice the same time as two players of the Lightning: Steven Stamkos and Nikkita Kucherov. One of the key players that contributed to the Ducks victory was goaltender John Gibson who at the end of the night managed to save 32 out of 33 shots on goal. The way that the Ducks played was more put together than when they played the Panthers on Friday night.

The Anaheim Ducks put an end to Tampa Bay’s 6-game  home winning streak and in the process put an end to games when the Ducks fell empty handed and were dealt a loss in the past, now thanks to the Anaheim Ducks the Lightning just got their 2nd loss of their season. The funny thing about the game was that only Ducks and a former Duck got the puck into the net. Chris Kunitz got their one and only goal of the game.

When the Ducks took on the Lightning each team gave it all that they got to end with the 2 points and that team was the Anaheim Ducks who looked strong and mighty in the game tonight. 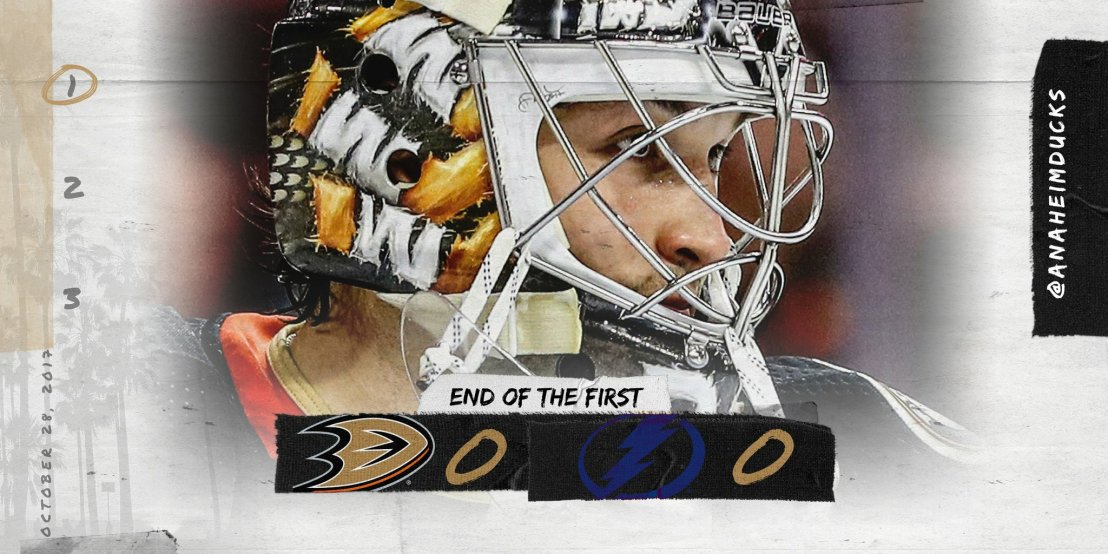 Like I said Ryan Getzlaf had the job to play more on the defensive side every time he was on the ice with Stamkos and Kucherov, he did that from the start to the final minute of the game. They both had many scoring chances and possible break-away’s  but Getzlaf was there and it seemed like they just couldn’t do much with having the Ducks captain all around there space both front and back and at some points at the side.

There was a bunch of skating up and down the ice and shots that ended up wide or in the hands of the goaltenders (John Gibson and Peter Budaj), no calls were made until there was 7 minutes left on the clock when Tampa Bay goes on the power play as Ryan Getzlaf makes his way to the penalty box for high-sticking. On Tampa Bay’s first power play, Gibson denied them of scoring a goal on the power play. Their power play consisted of several big saves by goaltender John Gibson and the Ducks love the size of Jaycob Megna, he is 6’6″ and the way he uses his body when he comes in contact to pucks.

In one of the times where the Lightning attacked the Anaheim net, John Gibson lost his goalie stick. It is good having a big defender where Jaycob Megna is just able to tap Gibson’s stick right to him.

The Anaheim Ducks and the Tampa Bay Lightning both head to the locker room with the game tied at 0-0. Both teams will come back in the second period looking to score goals to put them on top.

John Gibson starts the period off on fire and he really showed his goal-tending capabilities with that amazing saves just 2 minutes into the second period, words can’t really describe what a great save that was. Chris Wagner got up close but not personal with Vladislav Namestnikov when they battled each other in the side-boards, even though the offense kept on going the fans in the arena were all on Wagner and Namestnikov’s little battle. With only 13:15 left in the period Nick Ritchie heads over to the box for an obvious slashing penalty. Tampa Bay Lightning weren’t able to get anything past the outstanding performance by Gibson, NO GOALS were made during their power play and before they knew it a penalty was called now the Ducks got the man advantage with a Ducks power play who did generate a goal during the power play. ANAHEIM DUCKS GOAL!!!!! RICKARD RAKELL with the first power play goal of the game assisted with a perfect pass from Brandon Montour and Ondrej Kase with 9:40 minutes left in the second period.

Sometimes the referees seem to be blind because around to the final 5 minutes of the period to go the referees call an interference penalty on Josh Manson when he wasn’t really doing anything, it was Brandon Montour that actually should have been given that penalty. Manson served the penalty even though he felt he didn’t do anything to get that penalty but just as Manson leaves the box the referee calls a penalty on the Lightning for too many man on the ice and the Ducks go on the power play. The Ducks were amazing on their power plays because good things happened to them on the power plays. ANAHEIM DUCKS GOAL!!!! IT’S BRANDON MONTOUR  with the power play goal after he gets a sweet pass from Getzlaf, all he did was point, aim and shoot just like a sniper. Now the Anaheim Ducks lead 2-0 in the game, both power play goals.

John Gibson still looking sharp slipped up when he was out of reach to try to save a bouncing rebounded puck and the Tampa Bay Lightning score. It’s Chris Kunitz, former Duck, with the goal. Lightning trail by 1, the Ducks are still in the lead 2-1. Someone they didn’t expect is a puck going into the net with a tenth of a second left in the period and it being a good goal. It’s Hampus Lindholm at the top of the blue line just smacks that puck to the net and it went straight through all the bodies in front of the net and went in and counted with .01 seconds left in the period. GOOD GOAL. It was over the line before the buzzer, that is a goal that is now known as the “buzzer goal” and now the Ducks are in the lead 3-1, and the Ducks head to the locker room with a 2-goal lead all thanks to that outstanding goal by Lindholm just seconds away from the end of the period. 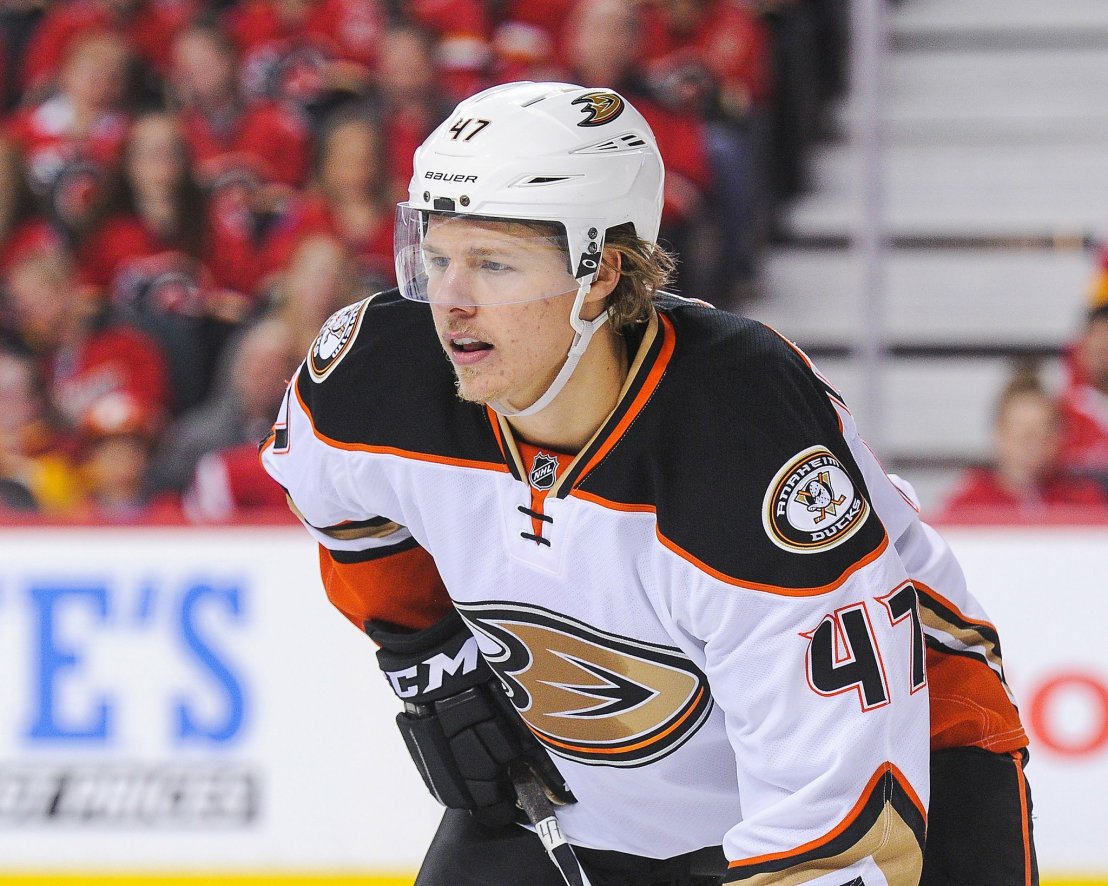 Ryan Getzlaf was thrown into a position to were he plays some of both positions defense and offense, the way he played was very effective and must have been frusterating for Stamkos having Getzlaf in your face for almost the entire game. The beginning of the ending frame of the game consisted with a lot of skating up and down the ice and stellar saves by goaltenders. It was like that even when Jakob Silverberg was sent to the penalty box for slashing. The Ducks killed that penalty and they seemed to be in control and tryed to make it almost impossible for the Lightning to get one by the Ducks goalie John Gibson, who was on fire the entire game.  Now Gibson wasn’t the only one on fire, AND ANAHEIM DUCKS GOAL!!!! RICKARD RAKELL!!!!!!!!! With the bash brothers (Corey Perry and Ryan Getzlaf) on point they worked the puck and got it to Rakell and he just gets it to and in the net leaving the Lightning trailing by 3, the Ducks are still in the lead 4-1. Then the Tampa Bay Lightning were desperate for a goal and they did something that is not normally seen in hockey, they pulled their goalie with 4:51 left in the game. Basically, the Anaheim Ducks shot the puck toward the net every chance they got, none went in but if it were to go in Rickard Rakell would’ve ended the night with the first hat-trick of the season. Sad to say, but that didn’t happen. Gibson being on fire the score remained 4-1, he saved 32 of 33 shots on goal, Budaj saved 17 of 21 shots on goal.

Ryan Getzlaf (on the game): We came out with a purpose. We got embarrassed in the other Florida building. We came out playing hard, doing the right things.

Ryan Getzlaf (on back to back games): We got rest yesterday [Friday]. We’re ready to go. We have to build off this one and finish this trip right.

Rickard Rakell (being able to laugh off hitting the post on his hat-trick bid): I’m just happy Randy put me out there and gave me the chance.