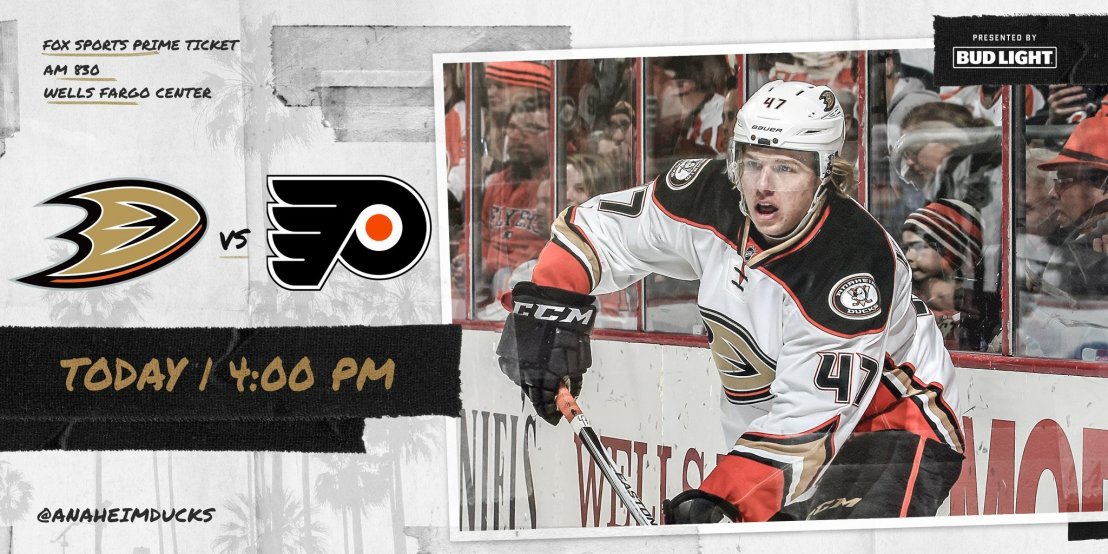 It is the final meeting between the Anaheim Ducks and the Philadelphia Flyers and with players of the injured list the Ducks made it a good game. The Ducks seemed to be more energized and confident in the game that could be because they had their captain Ryan Getzlaf (who missed the last 3 game due to an injury) and defender Hampus Lindholm back in the game, after missing all the pre-season games and the first 7 games of the season. Lindholm made his NHL season debut on Tuesday night’s game against the Philadelphia Flyers.

The game started off with a few penalties given to both teams. The Ducks got off to a bumpy start with Nick Ritchie heading to the box with a face-off violation penalty, Flyers start the game on a power play. Ivan Povorov skates off to the penalty box for tripping. Gibson still look strong and very sharp in the opening frame, the Flyers somehow found a way to sneak one by and it’s Sean Coutuier with the goal, Anaheim trails by 1. Chris Wagner made the Flyers made when the beast that he is ran into Brian Elliott and he was a lucky Duck- no goaltender interferance was called. The game suddenly got interesting as soon asgloves were dropped between #3 Radko Gudas and #3 Kevin Bieska go at it, it’s a #3 fight. According to the Anaheim Ducks, ” An interesting exchange- and one we’ve seen before- occurred late in the first period when veteran Kevin Bieska and Radko Gudas were sent to the penalty box for unsportsmanlike conduct. Both players dropped their gloves in anticipation of a fight, but the officials stepped in before they could grapple. As soon as they exited the box, the two players squared off in what turned out to be a one-punch knockdown for Bieska, who caught Gudas with a clean right to the jaw. Gudas went straight to the locker room…” It was a very clean fight for Bieska, 1 punch is all it took for Gudas to hit the ice.

With almost a minute and a half left to go in the first period…..AND ANAHEIM DUCKS GOAL!!!!! ONDREJ KASE. With the Ducks all over the place Kase finds Grant and with a shot from Derek Grant, Kase is there in front of Elliott to tap the puck into the back of the net. The Ducks head off to the locker room tied at 1. Anaheim Ducks 1 and Philadelphia Flyers 1.

What does one need to do be a sniper? Well, just ask Brandon Montour, perfect timing by Beauchemin and a great pass by Kossila, who got the puck to Montour and with him speeding down the ice like a jet Elliott had no chance in saving that shot from Montour, a shot that came out of nowhere. After such a beautiful play a few penalties when Ryan Getzlaf and Wayne Simmonds get all tangled up. Wayne Simmonds off to the box with a 2 minute holding penalty and a 2 minute cross-checking penalty, while Ryan Getzlaf skates off to the box with a 2-minute penalty for hooking. It’s 4-on-4 for 2-minutes then there is a the Ducks go on a power play, which they didn’t do anything on. With another Flyers penalty on Claude Giroux the Ducks go on the power play once more and with only 10 -minutes left in the period. AND ANAHEIM DUCKS GOAL!!!!!!! POWER PLAY GOAL!!!!! NICK RITCHIE. Nick Ritchie with a great shot by Hampus Lindholm that puck to Elliott who can’t find it but Ritchie finds and gets that puck right through the pads of Brian Elliott. With what was a battle-play goal Anaheim Ducks lead 3-1 with the power-play goal from Nick Ritchie. John Gibson is giving a stellar performance and keeping the puck out and away from getting in the net, he has denied the Flyers of so many great scoring chances. With less then 2 minutes left on the clock, an attempt by Perry a loose puck trades hands and with a swipe from Getzlaf finds Rickard Rakell who just buries Ryan Getzlaf’s shot on goal. ANAHEIM DUCKS GOAL!!!!! RICKARD RAKELL.  The Ducks are in the lead 4-1, which makes the Flyers trail by 3. They period ends with a few Duck penalties. Andrew Cogliano is off to the penalty box and then shortly after Kevin Bieska makes his way to the penalty box for slashing, giving the Flyers a 5-on-3 man advantage. The Ducks head to the locker room at the end of the middle frame with a 4-1 lead and a 3 goal advantage.

With just 4-minutes into the third period…ANAHEIM DUCKS GOAL!!!! RYAN GETZLAF!!!! With the “Bash brothers” on the same line the good times come around with a odd pass from Corey Perry who gets it to Ryan Getzlaf who shoots the puck from one of the face-off circles, one shot that’s all it took, that puck got past Elliott and into the back of the net. Like I said “bash brothers” Perry finds Getzlaf and he manages to get the puck through the wickets of Brian Elliott, and now the Anaheim Ducks lead 5-1 giving them a 4 goal advantage over the Flyers.

Then things went a little south when Rickard Rakell heads to the penalty box for a slashing penalty. The Ducks killed the penalty off but soon after that Philadelphia Flyers Goal. Sean Coutuier finds the back of the net with a wide open side of the net that was hard for John Gibson to get to the puck to prevent it from going in. The Ducks are still in the lead 5-2, Flyers trail by 3. With 6:20 left in the game Ondrej Kase goes on a trip to the penalty box for tripping and the Flyers go on a power-play. Trying to get a goal, Simmonds should have got a call for goaltender interference but didn’t. Simmonds basically runs into and sorta kicks John Gibson, which shifted Gibson’s chest protector and it seemed to cause him so discomfort, due to the fact that one of the trainers rushed to Gibson who looked like I’m good to go as shifting the protector back in place.

Ondrej Kase was slashed from behind by Provorov on a breakaway, and the call was Penalty Shot. Ondrej Kase gets the first penalty shot of the season for the Anaheim Ducks and he also gets the first penalty shot goal. IT’S ONDREJ KASE!!!!!!!!!! PENALTY SHOT GOAL!!!!!!!!!!  That was the game winning goal. Anaheim wins their first away game 6-2 here in Philadelphia to the Flyers!

The Ducks came out on top even with taking 9 penalties in the game. Anaheim Ducks broadcasters mentioned and discussed about Ondrej Kase. That it seemed that he had a jump to in his step, coming off his injury, and that his penalty shot goal was great and seemed to be overall feeling better at his game.

It was another steller performance by Anaheim Ducks goaltender John Gibson, his game seems to get better and better than the game before this one. Yes I feel Gibson is a goalie that improves his game with every game he plays.

Thoughts on the game from the Anaheim Ducks players and coach Randy Carlyle:

Ryan Getzlaf (on the game):  Overall it was pretty good. I felt good getting my wind back. The passing and those sort of things will come… I felt good out there. That was our focus before I got back this time. Last time we rushed it back, obviously I ended back on the [injured reserve]. This time we wanted to make sure we did the work and we were ready to go.

Ryan Getzlaf (on starting the road trip with a victory): It’s a  starting point. That was the first kind of complete game we’ve played. We spent a little bit too much time in the penalty box, but we did a good job killing those off and get going in the right direction.

Kevin Bieska (on Ryan Getzlaf): He’s our captain and he’s our best overall player. You take [Sidney] Crosby away from Pittsburgh, What happens? It’s a different team. When he’s back and he’s playing well, we’re a really good team.

Randy Carlyle (on Ryan Getzlaf and Hampus Lindholm): They’re our captain and then a minute-chewer on the back end. We’ve been banged down and beaten up pretty good with injuries. Anytime you can welcome veterans back and they come in, it does energize your group and give you confidence.

Hampus Lindholm (on season debut): Felt OK. Took a while to get the feel of the game. It was quick so you have to be in position otherwise the guys are going to make you pay, which they did early… Thought I recovered well.

Claude Giroux (on the game): They had a good forecheck, guys that can skate, big bodies. We just couldn’t find the puck tonight.

Shayne Gostisbehere (on the game): This one stings a bit and humbles you a bit. It’s our first bad loss as a team this season so I think it’s going to show a lot about our team how we respond.

I feel that the focus for the Ducks was to get pucks to the net and play the game the same way they did on Friday night when the Ducks faced the Canadiens and got a 6-2 victory.  The Anaheim Ducks, well, same score different team. Ducks defeat the Philadelphia Flyers 6-2. According to the Anaheim Ducks, the Ducks have scored five goals-or-more in consecutive games for the first time since February 15-21, 2016.

The Anaheim Ducks are back at it tomorrow night when they take on the Florida Panthers @4:30 at the BB&T Center in Florida. Don’t forget to record the game if you can’t be home and in front of the TV by puck drop and if you’re on the road tune into AM 830 to listen to the game.

The Anaheim Ducks are coming to Florida with 2 big consecutive wins- with their defeat the Canadiens 6-2 and their win against the Flyers also 6-2. With the Anaheim Ducks captain back and defender Hampus Lindholm and possibility of the return of Sami Vatanen sometime on this road trip the Ducks are starting to look like the Mighty Ducks of Anaheim.